THE THREE TYPES OF MEANINGS OF VED MANTRAS. 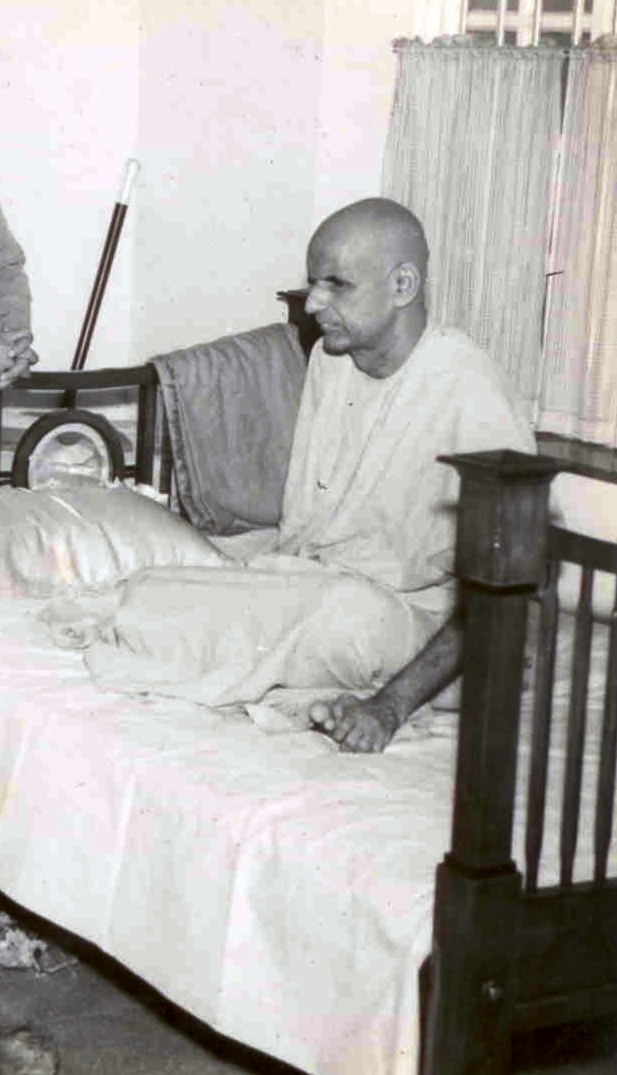 From the book LEKH aur UPDESH

The tales of Cheer Haran and Raas Leela are closely interconnected. ‘Cheer Haran’ is the means and the Raas Leela is the fruit (end result).

A student prepares for his course for the whole year and receives a certificate or acknowledgement for his hard work in the end.

The ‘Cheer Haran’ is like a course and the certificate is the bhakti and mukti (devotion and liberation).

The Gopikas were trying their best to get this certificate and for that they had taken the vow of the Katayani fast. They started the fast in the first

month of Hemant Ritu .The reason for keeping the fast was to gain the main object of mukti. They pray to Katyani mata and ask for the following boon. 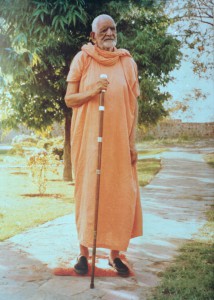 “Hey Katayani, Hey Mahamaye, Hey Maha Yogini, Hey Swamini of one and all. Please make Nand Nandan our husband. Devi we bow at your feet.”

Bathing nude in the river became an obstacle in their path to mukti (liberation) and also in the Katyani fast. The Lord asked them to do penance by bowing

to Surya Narayan Swami — “Hey Gopiyo, you have gone against the rules of the devta and the penance for it is to salute the Sun Lord”.

After they had done the requisite rites for the penance the Lord said- “Hey Kumaris (young girls) now all of you go to your own homes. Your sadhana

has been accomplished and in the coming Sharad Ritu you shall have my company. The purpose for which you have fasted will then bear fruit.”

In the Bhaagwad 10-22-27 the Lord says that in the end the Gopikas would merge in Him as they wanted Him for no ulterior motive. He would give them darshan and fulfill their wishes.

Those who offer their mind and Prana to the Lord, their desires do not take them towards worldly matters just as the boiled or the roasted seeds can

never bear a new fruit. (They get burnt i.e. no new karmas).

The Lord is clearly indicating the purpose of Nishkam Bhakti (unconditional devotion) here. By obtaining the bhakti of the Lord all desires and impressions

of the mind get washed off. They are able to enjoy the experience of the pure Brahman aspect and the attachments to the world no longer exist.

There is love only for the Lord. This is the reason why Shri Krishna organized the Raas Leela for the gopis. 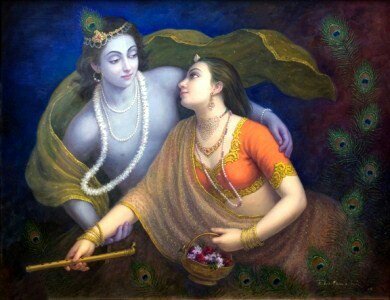 I have mentioned earlier that all the leelas of the Lord have Adhidaivik, Adhibhautik and Adhyatmik meanings. The SatChitAnand Para Brahman

Shri Krishna is the ‘Param Tattva’ –the basis of everything.

The 4 forms of Param Tattva are –

VIRAT: The pure chaitanya (consciousness) when associated with the totality

of gross bodies of Creation is called ‘Virat’.

The scriptures have explained this by the metaphor of a cloth that has a fine texture called ‘Chhit’ (that is kind of a calico cloth).

In the ‘Panchdashi’ (a text by Shri Vidyaranya) in the chapter on ‘Chitradeep’ in the second shloka the Paramtattva and the four aspects of the Lord are described.

that in Paramatma first we find the Chit aspect, second of the Antarryami, then of the Sutratman and lastly the Virat aspect or swaroop. 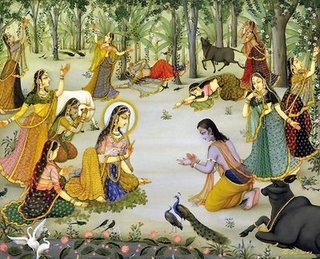 In the third shloka it is further explained:-

The clothes that are pure and have no mix of anything are called ‘Dhaut’,

When starched, they are called ‘Ghatit’,

When designs are drawn with ink the cloth is called ‘Lancchit’

and lastly when the cloth is colored it is called ‘Rajit’.

In the fourth shloka the four aspects of Paramatma are explained by the commentary of Vidyaranya. He writes—That aspect of Paramatma that

has no association with Maya is called ‘Chit’ and also called ‘Brahman’.

When associated with Maya that same Paramatma becomes ‘Antaryami’ or ‘Ishwar’.

Bhutas’ (the 5 elements in their pure form), He is called ‘Hiranyagarbha’. When associated with the gross manifestation of this world made up of the

mix of the 5 elements (Panchikrita Bhutas) He is called ‘Virat’. This ‘Virat’ aspect is the AdhiBhautik aspect.

The ‘Hiranyagarbha’ and ‘Ishwar’ aspects are the AdhiDaivik aspect.

The one that is in the pure form, the pure Chaitanya (consciousness), Brahmaan, it is the Adhyatmik aspect.

The creator of the Raas Leela, Shri Krishna was a Purna Avataar (an incarnation with all attributes).  The above three aspects have to be there

in Him to be called a Purna Avtaar.  When He Himself has all three aspects then the Vedas too should have the same.

Bhaagam—the revered aspect that is knowable.

Animesham—not resting for even a minute.

Yatra— towards the Sun.

Saha—the Aditya Dev on the orb of the Sun.

May that Sun be excited to accept me in this body.

Suparna—the senses that go towards everything.

Bhaagam—gets hold of the respective senses.

Animesham—doing the job at all times.

Vidatha—from the point of duty.

Abhisvaranti—offers all subject matters of the stimuli to the Atma by which it is able to say that I see the forms.

Gopaha—the protector of the body.

Aavivesha—may it arise or show itself so that I know my true Pure Self,

the one without titles, the witness to everything (the Saakshi Roop).

In the olden days there were not many officers. Each village had only one head (Numbardaar).

The king was head of all of them.

The village head (Numbardaar) collected all the taxes (lagaan) and gave it to the Tahisildaar.

This was the way of governance in the olden days. We see that in our body there is a similar sequence.

Our senses are the “Numbardaar’ and their functions like sight, smell, taste etc are their villages.

The ‘Numbardaar’ of the village of ‘Roop’ (form) are the eyes. Of the ‘Shabd’ (word) the ears.

The mind hands it over to the minister –‘Buddhi’ (intelligence). The ‘buddhi’ hands over the lagaan to the king—the Atmadev.

It is at this time that the Atma says –“I am listening” and “I am seeing”.

either a happy state or in an unhappy state. “I am sad, I am unhappy. ”(thus behaves according to these emotions).

In the above mantra the Atma is thus described in an Adhyatmik way.

Now we shall tell you the Adhibhautik meaning also.

Suparna—the gopis that are moving around swiftly.

Bhaagam—part or portion of the milk or curds worth selling.

Animesham —without fluttering the eyes and watching Shri Krishna.

Vidatha—with the knowledge of their duty towards Shri Krishna, they serve Him. 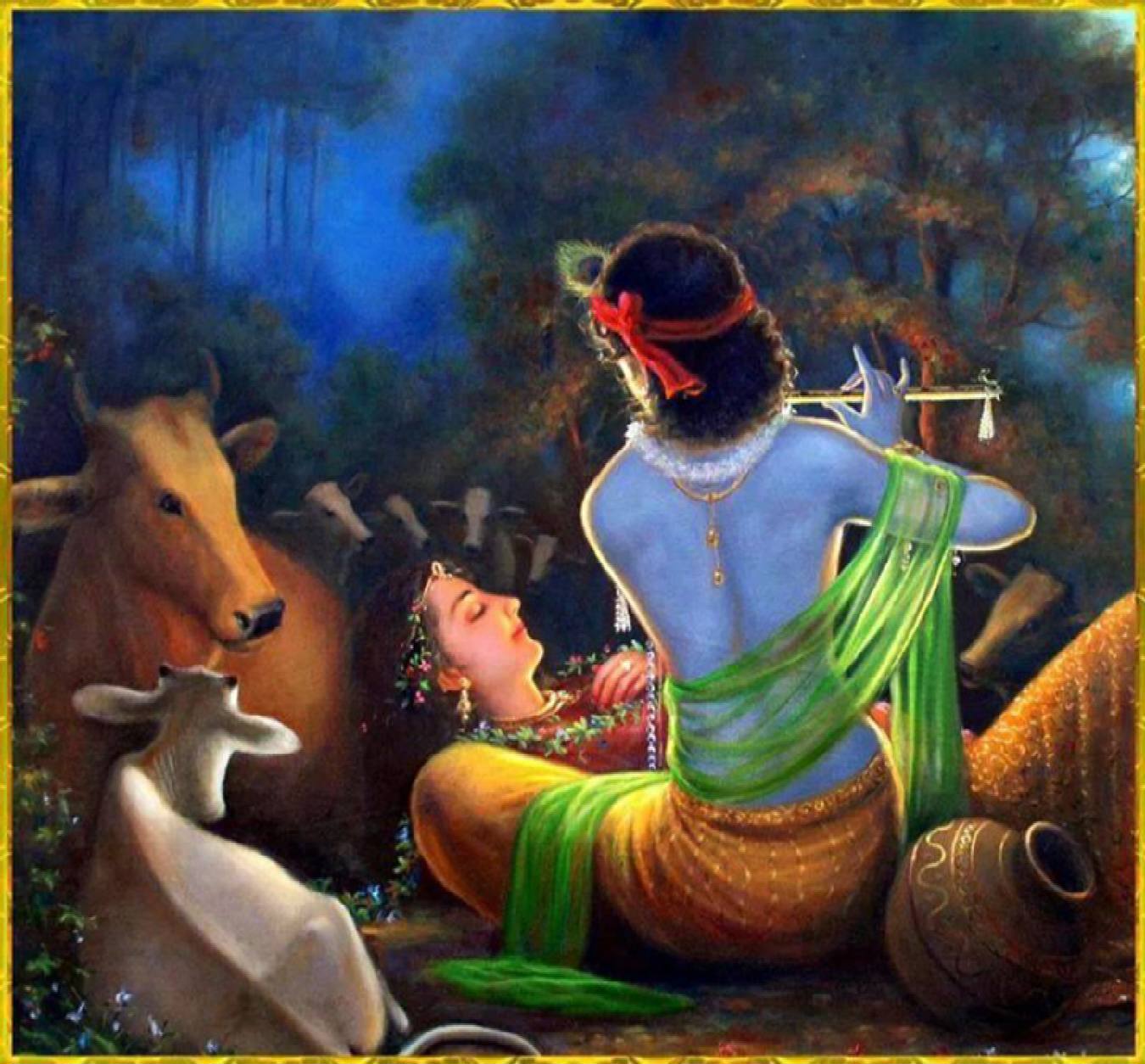 The deeper meaning is that the Gopis revel in seeing Shri Krishna and do not want to take their eyes off Him for even a second.

This Nand nandan (the son of Nand) has assumed the body of a human created out of Maya but actually He is ParBrahman.

Dheerah—Stable, equanimous in every situation.

Aavivesh-(aavishati) —He enacts the Raas Leela to please and gratify the Gopis.

In this Ved Mantra the indication towards Raas Leela has thus been established.

We have explained the 3 kinds of meanings in the Ved Mantra and similarly we can interpret the meanings in all Ved mantras.

In the Ramayana, Mahabharat and also in the Bhagwaad we can find a mix of these 3 meanings, as these scriptures have been written as the extensions of

the Vedas only. The mantras of the Vedas and the shlokas of the epics seem to be similar. The Raas Leela is mentioned at several places as it is the

indication of the supreme joy of BrahmAnand.

Nowadays we are not able to absorb any of the hidden meanings due to the effect of Kaliyuga. I would like to tell those who are unable to understand

the meanings that the Raas Leela was not one of desire but of ‘Sanyaas’ (renunciation) –a- Sanyaas Leela’. It is not of ‘bhog’ (pleasures) but of ‘yog’ (union) and thus it was a Yog leela. It is not Anuraag leela but a Tyaag leela.

By understanding the Ras Leela meaning we can achieve the Supreme Bliss in no time. It is wrong to call the Raas Leela a ‘Kaam’ (desire) Leela because

if it was so than it would have been also called a ‘Shringaar (adornment) Leela because in Shringaar dressing up and make-up is of the utmost importance. 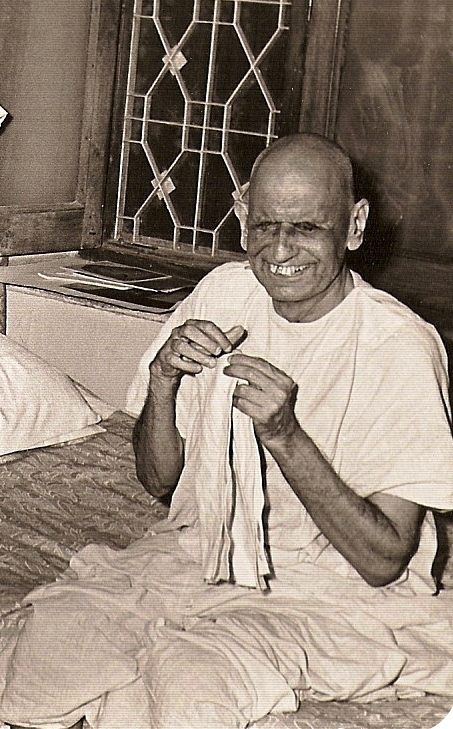 Many people think that the act of dancing with the Gopis is ‘Raas Leela’. Now let us understand this in the following manner:-

In sanskrit literature there are 9 main emotions or affectations of the mind –‘Ras’.

The writers of literature have included ‘vatsalya’ (maternal emotions) also as the tenth Ras.

Singular tense would be ‘Ras’ and the plural will be ‘Raas’. This indicates that when all the 10 emotions are there then there is Raas Leela (the play of all emotions).

It is known to all of you that we experience all kinds of emotions only when we merge all our senses in the Lord, who is an embodiment of bliss. The

rivers are known by their names only till such time that they meet the ocean. They give up their name and form-‘naam aur roop’ at the time of merging into

The gopis merged all the emotions in Shri Krishna and so their play of senses was called ‘Raas leela’. Since Paramatma is complete ‘PariPurna’, he is able

to manifest all the ‘Rasas’ (emotions). Those lacking wisdom will not understand the meaning in the above manner.

Some people even criticize Vedas. They say that in your Vedas there is a description of donkeys.

At one place in the Vedas there is an episode of Raja Bhujyu’s army attacking the ‘Rasabh’ and the critics have understood and implied the word to indicate donkey.

They are perhaps not aware that the meanings in Vedic language and those of the colloquial Sanskrit language are different.

In the word ‘jaar’ the colloquial language refers to a person having an illicit relationship with a woman. In the Vedas the same meaning is not applicable

for it means Sun –the dispeller of all darkness.

Here the word Svasa means night and the word Jarah means the one who dispels darkness of the night. In colloquial language the words would mean sister and

a bad man respectively. Similarly we can have several words having different meanings, but sounding the same.

Two professors came to me regarding the ‘Rasabh’ word and said-“Maharaj ji your Vedas describe donkeys and that the King’s army goes on donkeys.

How then can you claim that your culture was advanced, wealthy and at the peak of all humanity?

Kings generally ride on horses and elephants and they were also used in battlefields. Since the Vedas mention donkeys do you think that the victory

or development of the country was because of them?” I was very surprised to hear the misinterpreted meaning and I replied-

“Professor sahib, the word ‘Rasabh’ does not mean donkey. The confluence

of all ‘Rasas’ is ‘Raas’ and those horses who were able to exert all these emotions–‘Rasas’ were used by the king’s army.

In this world Kalidasa, Bhavabhuti, Shakespeare were great poets but none of them could express all the emotions. Kalidasa was expressive

in ‘Shringaar Ras’ and BhavaBhuti in “Karuna Ras’. Shakespeare could also express only one emotion, but blessed is this Bharat where even the

horses could express all emotions in their movements. On the way to the battlefield, their very walk showed that the rider was off to fight. If the one

riding the horse had to go to a condolence meeting, the horse automatically had a different manner of walking. King Bhujyu’s horse was also able to do

The Professor was very surprised to hear this and he had to accept that the Vedas were treasure troves of knowledge.

To conclude, it is in the same way that the meaning of ‘Raas leela’ was misinterpreted. One can attain Supreme Bliss by letting go off all emotions