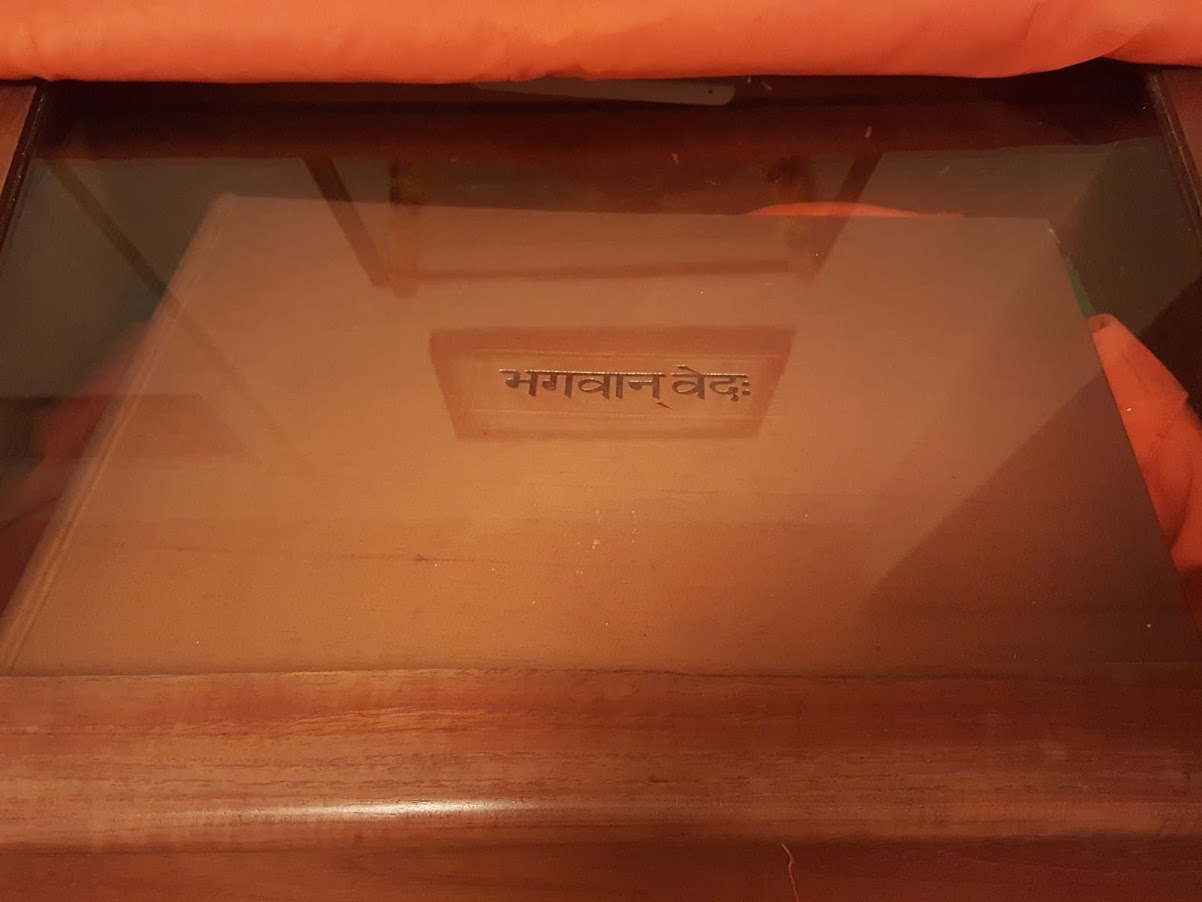 On 7th July Gurudev arrived in Miami and stayed at the home of Shri Shyam Sahani who is an old and dear devotee.

They are very loving, kind , humble and generous.

In spite of being very wealthy their compassion and generosity is worthy of praise!

On 8th July Gurudev gave a discourse at the famous local ashram of Swami Jyotirmayanandji. 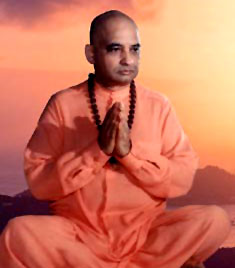 A large number of local American people attended the discourse. Swamiji is a prolific orator and is very learned also.

He has been teaching Vedic Knowledge to the local people since many years.

He teaches them the esoteric teachings of the Vedas and makes them familiar with the Samskriti of our country.

He brings about a change in their disturbed minds and conflicts in their lives and shows them the way to utilize their lives as a human being in the right way.

His close disciple Devi ShriLalita Anand Avdhoot sang the welcome Stuti in English in her melodious voice and also played the piano.

That night Swamiji presented and consecrated BHAGWAN VED at their ashram.

have spread the ancient Vedic Samskriti, Literature and Sanatan Dharma’s teachings and kept aflame this torch of  light of

knowledge and brought the human race together by spreading the message of unity, solidarity and love.

They continue to give these teachings thereby making changing their lives and making it a Divine life!

This important and historical work continues to be carried out by such Sants even now.

Their work will surely be chronicled in golden letters in history.

Sorrow and suffering (duhkha, tāpa) are inevitable part of life.

Knowledge regarding their origin, causes and even categorization helps one to minimize their effect, if not eradicate them.

The scriptures usually call them ‘tāpatraya,’ (‘the three miseries.’) . 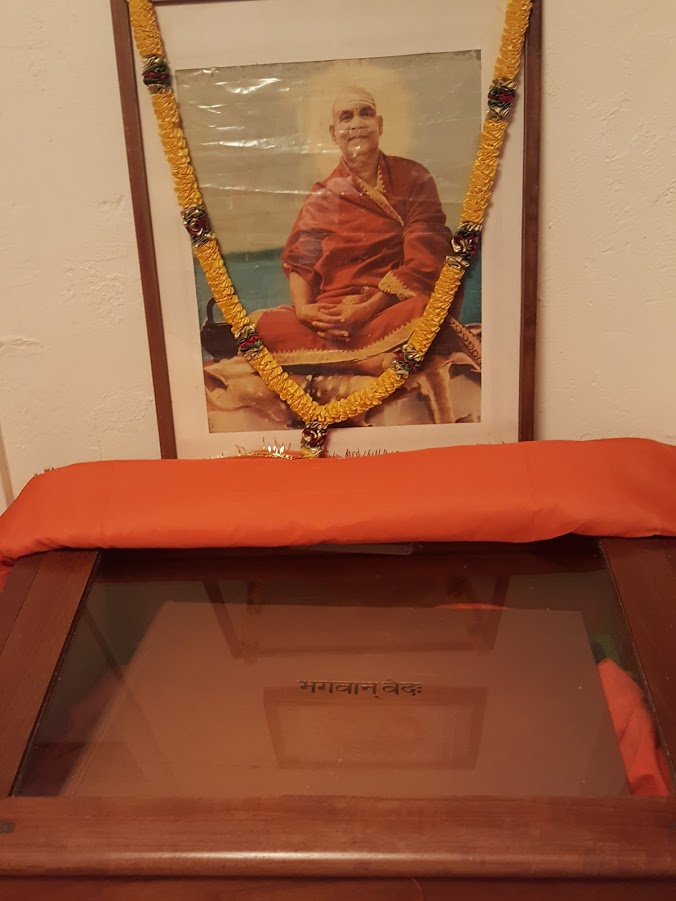 By dedicating their lives to Mankind these Virakt Sants find great solace.

Gurudev travelled at this late stage in life so that He could encourage and contribute to the good work carried out by such Mahatmas.

He was applauded by the various representatives of Bharatiya Samskriti Insitutions and felicitated and honoured for this pioneer work.

He said-“If the entire mankind learns to live in harmony then peace can be obtained very easily. They should live  together, eat,

think, walk and work together to achieve this goal.

Vedas teach us  to be one, and stay united and to speak in a sweet voice and to have a common agenda in life.

When thoughts and action are ONE then humanity can  strive and  achieve the status of Godliness!

On 9th of July Gurudev presented BHAGWAN VED to the Miami University.

Professor Okemoto gladly accepted this gift and expressed his gratitude.

Shri Swami Jyotirmayanandji’s disciples were very keen to have a question and answer session with Gurudev. 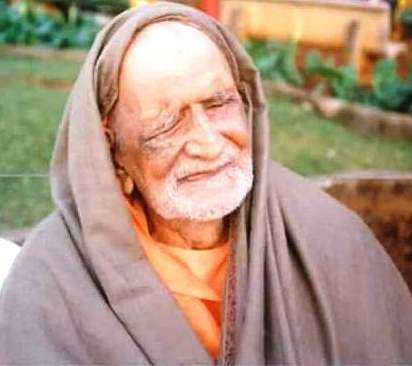 In spite of the short duration of time Gurudev accepted to participate in the program at their ashram on the 10th of July.

Shastras and by doing so their misapprehensions and doubts of the questioners were removed.

All the disciples were happy at the end of the Conference with the answers.

This session went on for more than an hour but finally it had to be concluded as it was time for dinner.

Gurudev were able to get good rest for five days at the ashram of Shri Swami Jyotirmayanandaji which was beautiful, quiet and scenic.

than a month although most of the cities there was only a three day stay.

This was a much- needed rest that Gurudev required.

Miami’s beaches are world famous and several ships come to this city.

The city has beautiful trees and the beach is shaped like a necklace and the amazing view can be seen far and wide.

THE STATUS/ PRESTIGE of WOMEN in the VEDAS.

During one of the talks Gurudev spoke on the prestige of Women as described in the Vedas.

Vessels and plates , wood and fuel and other such things in the house that are seen do not make a HOME but it is the housewife

which makes a home of all the things that are there in the house.

the presence of a loving wife will seem like a dungeon even if it  happens to be  a palace!

is the famous injunction in the Vedas which is an important part of Bharatiya Samskriti.

A wife is the HOME or in other words a Home stands for a wife.

It is our ignorance that makes us believe that women did not have any prestige or dignity in the ancient days.

In the Vedas the word used for a woman is-

The one who is honoured and respected  by all is called मेनाः Mena.

Until a man has a wife he seems incomplete and is considered HALF अर्धा and he remains असर्व and असंपूर्ण unconsummated.

When he gets a wife –’JAYA’  and gets children to continue the lineage only then is man complete!

In Shatpath Brahman it is written — 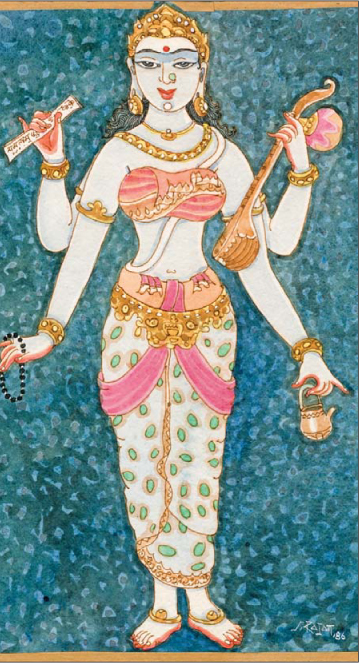 Maharishi Ved Vyaas has written in the Mahabharat–

She is the one responsible to help her better half ( husband) to cross the ocean of Samasra.

In the Vedic age the term used for WIFE was –

A wife is Auspicious and should always be कल्याणकारी ( conducive to one’s well being).

all  these qualities  and capabilities are there in the wife.

Lop Mudra, Surya and Urvashi and many others were Rishikas who had the darshan of Ved Mantras ( they were the Dristhas (Seers)  of the mantras).

Aditi, Usha, Indrani, Ila, Surya, Seeta, Vaaku Siniwaali, and other ladies have been praised in the Vedas.

There are STUTIS singing their praises.

From these examples it goes without a trace of doubt that   the women had a prestigious place during the period of the Vedas—Ved Kaal. 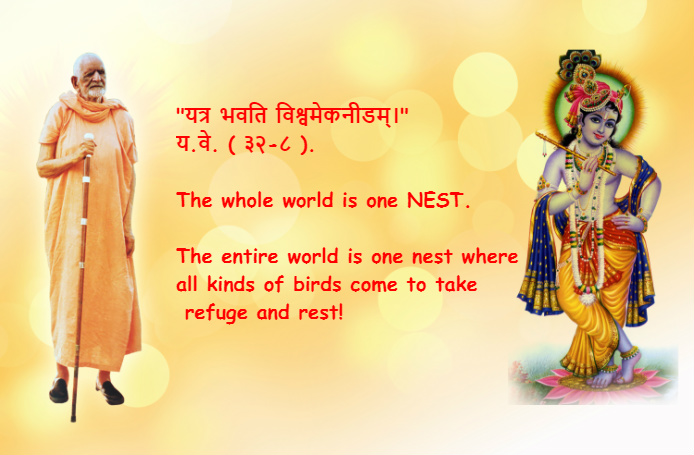