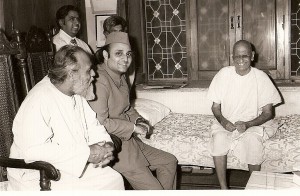 Ten days long  Centenary Birth Celebrations  from 8th to the 18th of January 1981.

You all must be wondering why an ordinary householder  has been made to sit  on the stage amongst the learned scholars and revered Maha Mandaleshwars !

There is a secret which I would like to share with all of you at the outset itself so that people do not question why Karan Sigh has been invited to speak here!

I will tell you two or three things. First of all no work  can be accomplished unless and until a representative from the Himalayas  is also present! 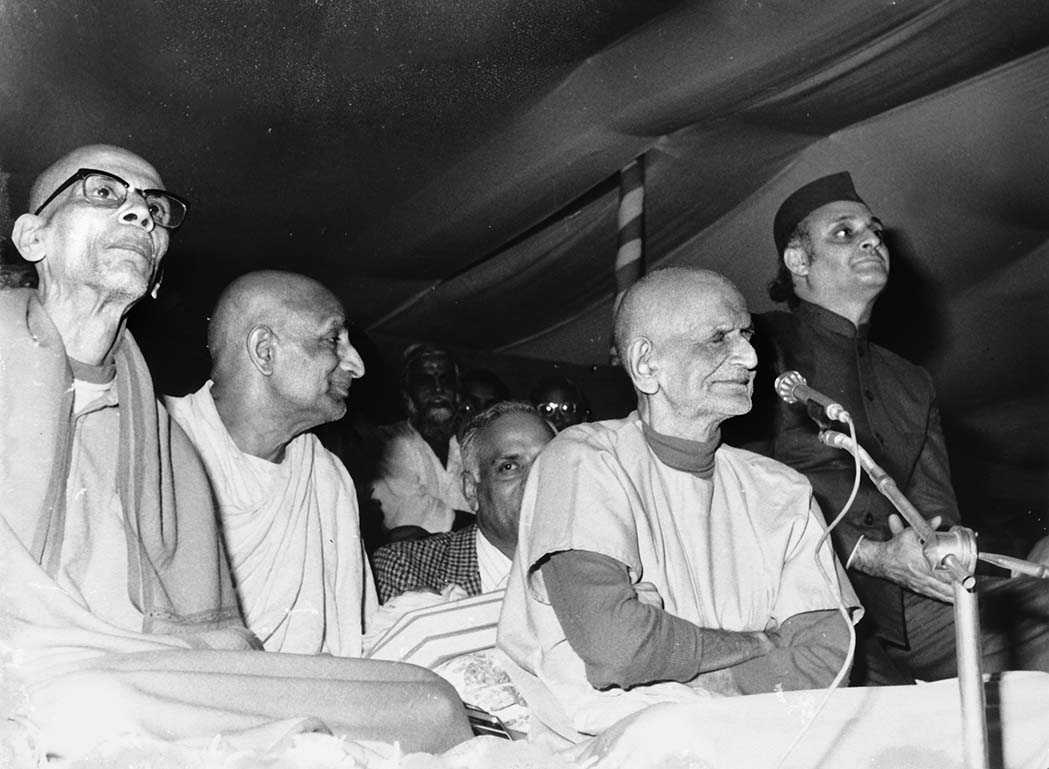 representative of the Himalayas.

Secondly any great work or undertaking has to be blessed by the Brahmins.

Also it cannot be completed without the Adyabal.

effulgence and the power that is represented. I hope to throw light on this aspect.

In a way, I am here to offer obeisance on behalf of my mother to her Guru and in this way I offer my Shradhanjali to my mother. I am extremely happy to be here for this reason.

Our Swamiji Maharaj remarked and wondered why so many Sadhus have come to Bombay!

It is not a bad place actually. Yes, Bombay maybe a little bad and so are many

other cities actually! It may be bad but at the same time Bombay is a  beautiful city also.

It is situated by the sea! Personally I have a great affinity for Bombay and have a close relationship with the city. 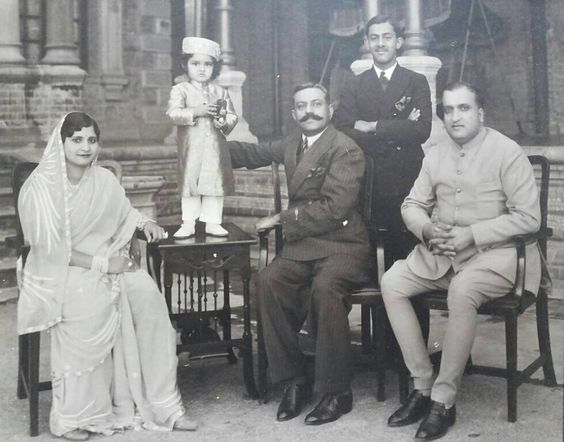 I was born abroad. My   first darshan of Bharat Mata was that of Bombay.

My first school was in Bombay. I was married in Bombay. With the blessings

of the Lord we were blessed with two children and both are born in Bombay.

My dear father the late HariSingh ji stayed in Bombay and he passed away here only.

For all these reasons Bombay is a place of Pilgrimage for me – a Teerth Sthana.

It is a very beautiful co-incidence that we are celebrating Sadguru Swami Gangeshwaranandji’s Centenary Birth  celebrations here only.

Several people’s Centenary Birth celebrations are celebrated but when the person Himself  is there amongst us in flesh and blood and is giving us darshan , such a great man’s Shatabdi ( 100 years ) I think is a great boon to all Mankind.

I consider this as my great fortune.  Swamiji is a jewel amongst Mankind, a great Mahatma who has spent His entire life in the propagation of the Vedas, not only

within the country but also all over the world.

Wherever the Bharatiya culture is still thriving, the name of Swami Gangeshwaranandji’s has spread!  There are no two opinions regarding this!

It is most appropriate that so many great men have gathered here to applaud and honour this great person!

Mankind is now at a crossroads!

The ancient traditions are dying and the new traditions are not being formed or created and the present generation is divided and split between the past and the future! They seem to be hanging !

We seem to be suspended in mid air like the Trishanku between the sky and earth .

( The wordTrishanku has come to denote a middleground or limbo between one’s goals or desires and one’s current state or possessions.)

We are not getting any guidance—Marg Darshan. In Bharat corruption is spreading

in all its corners even though the country’s Mool Mantra is ‘Satyamev Jayate’!

Actually TRUTH is our friend  and yet corruption is in all the four corners!

How can we get guidance if we find corruption in all quarters!

The guidance we seek can be only be got from our Samskriti ( culture). Just as

and rushing towards the ocean, our  Bharatiya Samskriti too is continuously

spreading and encouraging us. Our Samskriti is the one that has kept this nation safe.

It shows a new way of life in spite of the several ups and downs.

Once again, the time has come when we need a new lease of life that will revive the consciousness amongst the people and we have numerous gems in our heritage!

I consider YOG as the most precious of all the GEMs available to us in our Samaskriti.

If we were to introduce or spread Bharatiya Samskriti in ONE WORD,that word 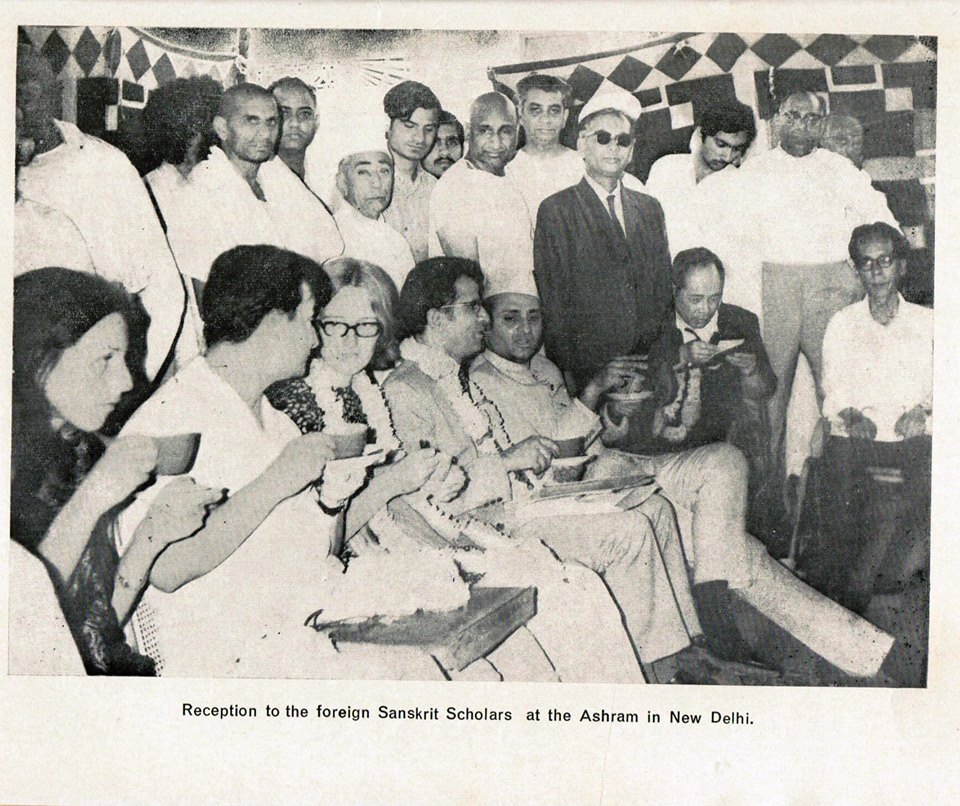 There are several Mahatmas present here who can talk about Yog, therefore it is not appropriate that I speak on this subject.

The only contribution I would like to make on this topic is that in my humble opinion  the meaning of YOG can be paraphrased in several ways and not just the षडदर्शन    SHATDARSHAN. ( the 8 rungs of Yoga Sadhana).

YOG is that path that facilitates the meeting of the Atma with Parmatma. Our ancient Shastras have shown us four ways of attaining YOG.

The first is Jnan Yog and this path has its own Scriptures like Upanishads,

Second is Bhakti Yog and we have the Shrimad Bhagwad elucidating it.

Third is Karma Yog and Bhagwat Geeta was just spoken about today.

Fourth is Raj Yog and Patanjali’s Yog Sutras are well known for this Yog.

All these are different paths but they nevertheless lead us to the same destination.

The purpose or aim is to get the  Milan( Union )  of Atma with  Parmatma.

In our life we have to practice YOG. I would make a humble request that everyone

should adopt all the four kinds of YOG and assimilate and synthesize them in their life.

He has to develop the discerning ability, the Vivek to know the truth and the untruth!

Today’s Man must also make use of Raj Yog in some way or the other but the most important one is KARMA YOG.

Until and unless we bring together the different YOGs and assimilate them as one the modern man cannot progress!

Let us all work for achieving this YOG. For such a great endeavor  Maha Purush  like Swami Gangeshwarnandji Maharaj  who is present on this stage and adding to its glory, who is a Mandlaeshwar and a Great Man, may He give us His Aashirwaad today and always. This is my prayer and request to Him.