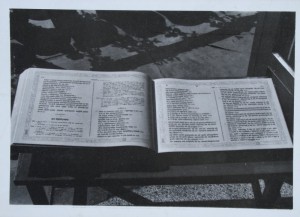 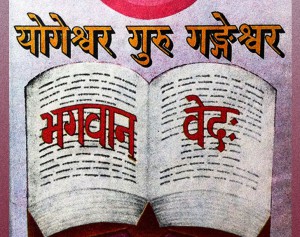 FROM THE BOOK   YOGESHWAR GURU GANGESHWAR-2

“GANGESHWAR CHATURVED SANSTHAN” was formed at the meeting  held on 24th September 1968 in Bombay when Gurudev explained theneed for spreading the message of the Vedas. Indians have faith in the Vedas but there is no where they could have the DARSHAN of Bhagwan Ved .Even if there were any texts they were not the kind that could be worshiped. 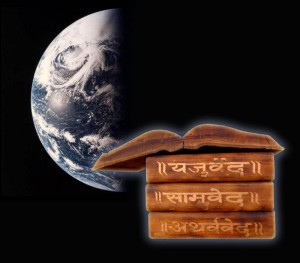 All the members present at the meeting were eager to extend all their help towards this great task and thus this new ‘Trust’ with the above name was founded.

On 2nd January 1969 in Ahemdabad   Gurudev  announced His Vedic mission.

This included publication, edition, translation and distribution  of  the holy book in one volume as the main feature.

To commence a task as huge as this and  at this late age, really  astounded everyone.

Since Gurudev is  VED SWARUP –वेद स्वरूप  He was able to take up this great work. 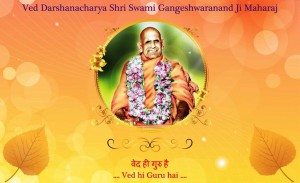 On 12th October 1969 there was an ‘ALL INDIA ORIENTAL CONFERENCE’ and was attended by Swamiji .Here  He met Shri Baijapurkar ,Maheshdutt  Shuklaji

and Shri Satya Swarup Shastriji. Swamiji had made this trip specifically to carry forth  the work of publication and printing of ‘Bhagwan Ved’.

Shri Baijapurkar proposed that the work be carried out in KASHI as it was a place where scholars of all 4 Vedas could be found .Also in Kaashi

were both Readers(Paathis-पाथि ) and Decoders(Arthayagnya) of the Vedas. The only thing lacking was a Press which could print such a book. 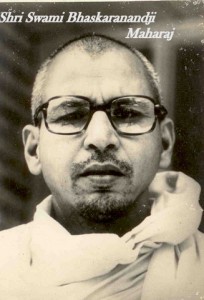 Swami Anand Bhaskaranandji Maharaj very enthusiastically suggested that a new press be set up. The task was given to him thus by Gurudev and

He proved to be the right choice for this mission. A special press which could accommodate the FONTS and the size of the book was thus set up in KASHI..

The city of VISHWANATH  was chosen for this great work.

The prefix YU means to join  and so the ‘YUVAN’  (youthful) Saint Swami AnandBhaskaranandji  Maharaj  who joined together everyone with his capability,

management aptitude and perseverance can be called YUVAN.

He devoted 3 years for this great feat and became Immortal as the MUDRAK (Printer and Publisher ) for BHAGWAN VED. 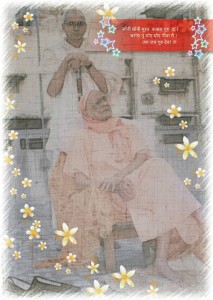 The task of Editing and Research  was given to Shri Narhari Baijapurkar. He was well known in Kashi  and so his contribution was very helpful in all matters.

A committee was  formed  and there were 2 scholars from each of the 4 Vedas as its members..

These vedic scholars knew all the vedic mantras by heart and were exponents of Vedas.

Traditional ‘Dashgranthis’(learned scholars who were serious pursuers of the Vedas, Mimamsa and Vyakharana ),professionals in publishing and artwork

were also members of the committee.

Shri Kashinath Shastri Telang (professor  at  Hindu Vishwa Vidyalaya ) was  also invited to help resolve all issues that were debated. 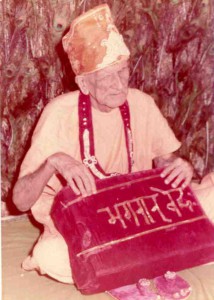 Some scholars would intentionally not correct the texts solely to show their importance as the readers would then be forced to seek their help to understand the text.

Bhagwan Ved could be published without any mistakes and shortcomings.

This was the first time ever that a treatise of this size and accuracy was ever published.

The word ‘VED” inspires an Indian and hence to have a glimpse or darshan of Ved in a book form is indeed a great blessing.

THE BHAGWAN VED BOOK is

Great caution was taken while collecting all the text and if there was any doubt or dispute , work would be stalled for even several months.

Besides the SAMHITAS the Vedas also have the UPANISHADS.

For the benefit of serious scholars  the mantras are set in an orderly manner.

The introduction pages in the beginning explain many of the topics in Sanskrit thus enhancing the treatise.

Two colours have been used in all the pages and the borders are illustrated with Vedic yagna equipment.

The cover has BHAGWAN VED written in bold  gold s letters by which the adorned book-form becomes Vigraaha swaroop . 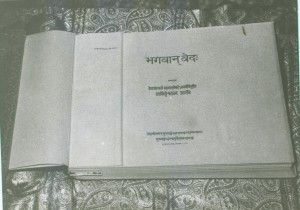 Special paper was sourced from J.K.Mills so that the pages last for at least a hundred years. There was no use of animal fat.

Swami AnandBhaskaranandji.   He  stayed in   KASHI  till this mission was complete.

The following scholars should be mentioned who gave complete co-operation and support :-

A Few notes on VEDAS

The Vedas were divided into 4 Granths(books) by Bhagwan Ved Vyaasji. By merely doing Darshan of Ved our sins can be destroyed, and if we study it the fruit will be much more.

Knowledge ,devotion and work are the 3 benefits of Ved Paath. The words of Vedas are Divine and cannot be attributed to anyone in particular.

Manu Maharaj In ‘Manu Smriti’ (11-97) has said that Vedas have all the topics concerning Past, Present and the Future. The only requirement is that

when we read or see the Vedas we should have the intellect or capacity to understand  the deep  meanings of the Richas (Mantras).

An astrologer can have one look at a birth chart and predict many things whereas a person not knowing astrology will not be able to understand anything.

In the same way  the one who has Divya Drishti(divine vision) and has the Grace of the Lord showered on him, be able to understand the Ved Mantras. 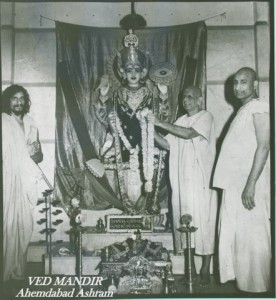 The tradition to pray and honour BHAGWAN VED was set forth by Shri Sanat Kumar ,the 1st in the lineage of the Udaseen Parampara.

He carried on this legacy for a long ,long time and BHARAT ,our country was benefited by peace and tranquility.

As times changed and Bharat was attacked by irreligious people , the tradition was broken or stopped.

The book CHANDRA BHAASHYA( written in the 16th century ) describes the practice of worshipping BHAGWAN VED with dhoop, aarti and pooja.

It says mantras are GURU and hence we should pray to them (Ved Mantras) in the same way we pray to the Guru with flowers ,dhoop etc.

Even if Bharat (India) wanted to follow this tradition there was no book form( like the Granth Sahib) to pray to.

Keeping this in mind Swamiji decided to print and publish  ‘Bhagwan Ved’. 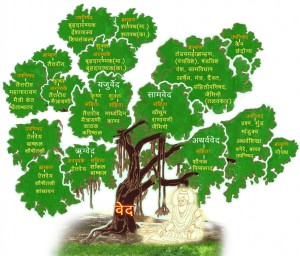