Teachings given to the King and to the People of Morvi ( Kathiawad).

Teachings given to the King and to the People of Morvi ( Kathiawad).
in the year 1943 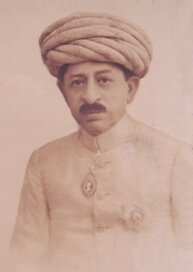 (Morvi State, was a princely state in the historical Halar region of Kathiawar during the British Raj.

The town of Morvi (Morbi), Gujarat, was its capital. The state’s last ruler signed the accession to the Indian Union on 15 February 1948)

Swamiji were given a royal welcome when they arrived in Morvi. They stayed at the Shankar Ashram and those days the ashram was looked after by Shri Narad Sharma.

At the behest of the King and his wife Swamiji requested Swami Sarvanandji to teach them Vedanta. Both of them were very happy to study under the able guidance of Swamiji.

It was during that time that the Quit India Movement of Gandhiji had started. Many leaders were imprisoned forcibly. Narad Sharma was very patriotic and he approached Guru Maharaj with tears in his eyes.
He said—“ Swamiji, Bapu, Nehru and the others leaders have been arrested in Bombay.” 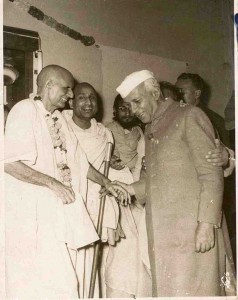 During those days some people of the state of Morvi planned to create a rift between the state and the King. This was a direct encouragement from the tactics of the British. A parcel carrying bangles was sent to the King by mischief makers chiding him on his masculinity.

After the formal greetings the Maharaja of Morvi said-“Swamiji Maharaj , some opponents are trying to create a rift in my kingdom . Someone has sent me a box of bangles to insult me. I do not want to overpower my people like the other states. For generations there has been a father son relationship between the people and the state . You must have heard people addressing me as Bapu and Ba to Maharani. How can a father punish the son even when he has made a mistake?” 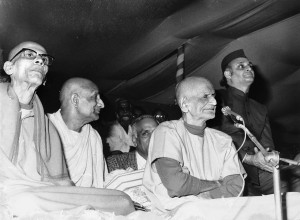 After saying these words the Maharaja waited to hear the advice of Swamiji.
Gurudev said—“ Rajan, If you have such high regard and good wishes for your people , nothing can ever happen and the peace of your state will never get disturbed. I have understood your concern and the concern of the people shall also be understood when a meeting is called for

We shall hold a meeting in the temple where we have been having spiritual discourses . People should be given a special initiation. I will give them Updesh and make them understand. But there is one condition! You should not take offence at whatever I say. Kings usually have pride and generally do not like to hear anything against themselves. I will have to say certain things to both side . If you want peace then it is necessary for you to face the truth and not to be offended by my Updesh. In this way there is nothing wrong to get people back on the right path.

Raja Lakhdheer Singh was far sighted , principled and loved his subjects . He was close to Saints and was ever ready to serve them. He agreed to the conditions of Gurudev.

The next day the esteemed people of the state arrived in the temple hall. Raja Sahab was also there.
Gurudev and Swami Sarvanandji gave the following advice. 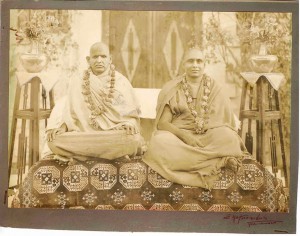 “It is a pleasure to know that the state shares a father– son relationship. This is according to our Vedic traditional teachings . There are many such instances in the history of India. Kings usually have compassion towards the people. Shri Ram Chandra Bhagwan who was law abiding and also a father figure to his people, renounced his pure and pious wife Seeta even though she went through the test of ‘Agni Pareeksha’.

Raja Vikramaditya used to disguise himself and roam around the city at night to know the state of affairs of his subjects. He would then try and resolve their problems.

Maharaj Sagr loved his people more than he loved his son. He abandoned his own son for the benefit of his people.I am happy to know that your king accepted the invitation for the wedding of a Harijan’s daughter and thereby proving that he indeed is your ‘Bapu’.

People of the state, let me tell you that difficult times are now impending. The state does not belong to just one individual . It belongs to the Raja and the ‘Praja’. The king and the people.

If we have a domestic conflict it will only strengthen the British Empire and when there is a rift in the state the opponents will clap their hands with joy.
We must start a revolution in the areas where the British are there, We should protect our own Kingdom so that when the time comes they can help us.I have noticed that the Royal families have been generous in their donations to religious and educational institutions and even for calamities like floods and drought. In Kathiawad there is a corpus fund to help drought victims.

Pujya Madan Mohan Malviya started the Hindu University at the cost of 3 crores and the major portion of the cost was donated by Royal families.I do not want to say anything more. It is pure hypocrisy to call the people of the state son and the King as father when there is a conflict!
It is important to have a pure heart because inner cleanliness is more important than outer cleanliness.

The Raja and Praja both should be aware that the Sant Samaj are there for everybody and everybody is there for us.
From the view point of detachment , no one is ours and we are no one’s.
It is the duty of the saint to give the most bitter medicine to cure the illness until peace is obtained.

To sum up, all of you should unite and not have a rift. You may appear different from one another on the outside but essentially you should be united. Be ONE! It is not good to have division in the heart. The overt unity displayed will be of no use if there is a rift underlying the show of unity. The king should also stop calling his people ‘Son’ or else treat his subjects in the same manner as the Royal Prince is treated.”
The people were touched by these words of Gurudev .There was peace and no further turmoil in Morvi.