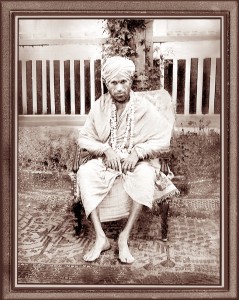 In the lineage of the Balhas, Swami Ramanandji is 14th in line. He was born near Ludhiana (Punjab) in Nathumajra village on the banks of the river Sutlej, in Samvat 1903 Phalgun Shukla paksh Trayodashi. His father’s name was Saraswat Brahmin Param Tapasvi Gopaldev and his mother was Sadhvi Smt. Dayadevi. His father had named him Vasudev Sharma. Both His parents left for their heavenly abode while Swamiji was still very young. He was brought up by relatives and due to his exceptional memory; He soon acquired knowledge in Sanskrit and Hindi. He recited Sanskrit Shlokas in a very melodious and clear voice due to the impressions of his previous lifetime (samskaras).

He lived a life of a recluse and spent His time in Sadhana. There was a dwelling of Mahatma Gopiramji near his village in Rajghat and He would often go there to listen to satsangs. Mahatma could sense the keenness of the young boy and realized the greatness that needed to be tapped. He groomed Him with love and care and soon Swamiji were able to recite the whole Shrimad Bhagwad Geeta in 45 minutes and the Shrimad Bhagwat in 24 hours.

Tapasvi Mahatma Sundardasji Vaidya also lived in the same ashram and at the instructions of Mahatma Gopiramji, Vasudev received his deeksha in the Udaseen Lineage at the age of 11 and was given the name Swami Ramanand. 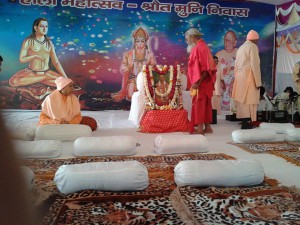 Swamiji served His Guru with great devotion and thus He was the recipient of his blessings. In Kashi, he studied all the different subjects at the behest of His Guru. He became a great Pandit of all shastras. Seeing the plight of the Hindu tradition, Swamiji decided to take up the mantle to revive Sanatan Dharma. He traveled all over India and initiated many others to help in this task. He established Libraries, Schools and Religious centres. He was in need of worthy disciples and sure enough, He met Chandreshwar and made Him the great Saint we know as Swami Gangeshwaranandji today.

After completing the worldly duties, He took Samadhi by sitting in Padamasana (a yogic pose where one has to sit cross-legged in a lock form) on Tuesday Maghshirsha, Krishna Paksh, Ekadashi day in Samvat 2000 in the early hour of 6 a.m. He chanted OM and merged with the source He came from. We owe extreme gratitude to Him for the path He has laid for all of us.

Every year at Holi time, there is an Assembly in Vrindavan to pay homage to Our Dada-Guru where many learned saints and Mahants collect.

Hari Om.
(Translated and compiled by Lata (Geeta Nichlani)
From the Book: OUR MAHARAJSHRI– AN INTRODUCTION.
By Late Seth Balchand M. Pamnani.