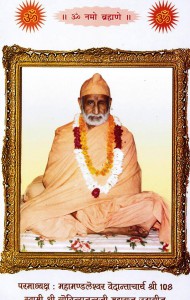 After the passing away of Vedaratna Vedalankar Swami Shri Sarvanandji Maharaj, Swami Govindanandji is successfully shouldering the sole responsibility of the whole Mandali of Pujya Gurudev. He has great love and staunch devotion towards the revered feet of Gurudev. He has always obeyed Swamiji without fail and spared no pain in fulfilling all the functions organized at his behest.

He prayed to Gurudev whole-heartedly, “Kindly offer me your refuge and give me Sanyasa Diksha.” Pujya Gurudev decreed, “Better if you take Diksha from Chhote Maharaj Swami Sarvanandji. I am Dada Guru.” Then Chhote Maharaj gave him Udasin Sampradaya Diksha according to Scriptural rites, ordained him to sanyasa, and showed him certain rites for Japa etc. He started reciting Japa with concentration of mind. 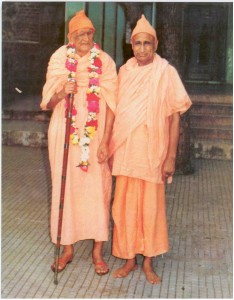 Gurudev ordered Govindanandji Maharaj to complete Japa-anusthan with proper rites at Hrishikesh in the year 1943. He went to Hrishikesh, moved in the old woods and continued Japa for one year. There he had the darshan of Pujya Gurudev and LORD in his heart. In the year 1944, Pujya Maharaj Shri ordered him to go for study. From 1944 to 1953, constantly for nine years, he stayed at Kashi and studied Vedanta Darshan, Sanskrit literature and the Vedas with great concentration. Then, later in 1953, he joined the mandali of Gurudev with his kind permission and continues there even today.

He accepted the responsibility of publication from the year 1962. The first part of the speeches of Gurudev was published in the first volume of ” GURU GANGESHWAR GRANTHAMALA”.

Numerous public charitable and religious trusts were formed by Pujya Gurudev. Swami Govindanandji is the honourable trustee and secretary of many of these Trusts and tries His best to execute them well. He also looks after the various ASHRAMS established by Gurudev.

He is the most beloved disciple of Gurudev and wins over the minds of all by his modesty and industry. He never feels fatigue while arranging numerous functions at various Ashrams for the benefit of the common man at large and for the spreading of religious knowledge. He is always keen and is constantly at work to carry out the mission of Pujya Gurudev and by his tireless efforts ,the activities of the mandal have proliferated day by day.

People had an occasion to realize his power of organization when he successfully arranged VEDA Parayanas and Shrimad Bhagwad Saptaha of Saint SHRI DONGREJI Maharaj on the eve of the Birth Centenary Celebration of Pujya Gurudev. He is a very good orator and explains in a very lucid language the abstruse points of scriptures in his lectures. He is, in fact, a real successful executor of all the activities of Pujya Gurudev. 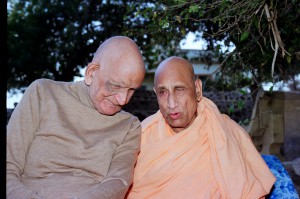 Under the good guidance of Swami Govindanandji, all the Ashrams are working properly. Whatever may be the function, ceremony, or Utsava in any Ashram, Swami Govindanandji was there with his whole being. His enthusiasm has no limits and he never tires. Under his inspiring guidance, activites of all Ashrams are increasing year after year.

Gurudev had tremendous faith in Shree Govindanandji and Swami Govindanandji Maharaj is a fountain source of all the activities of “UDASEEN SAMPRADAYA” at present. 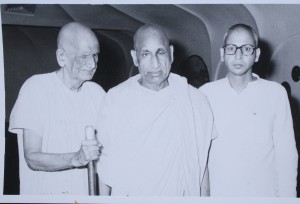 To highlight the lifetime achievements of Guruji-the Saint of India – a Yugpurush, and keeping His pious memories alive, a magnificent memorial, GURU GANGESHWAR SMARAK BHAWAN has been constructed at Vrindavan (Mathura), Uttar Pradesh.

On this auspicious, occasion, among other activities, Shrimad Bhagwat Saptah was organized. One of the world famous exponents of Bhagwat, Pujya Shri Rameshbhai Ojha “Bhaishri” conducted the Bhagwat Katha and distributed the nectar of the Gods. Along with this, there was a recitation of 108 Bhagwats by learned scholars for 108 yajmans; close disciples of Swami Gangeshwaranandji Maharaj. In addition, Ras Leelas, Yagyas and other programmes were also conducted for this occasion. Vedantacharya Mahamandaleshwar Shri Swami Govindanandji Maharaj Udasin presided over all the functions.

We wish a long life to Swami Govindanandji Maharaj on the occasion of his birthday to-day ,which is also the Raksha-Bandhan day.