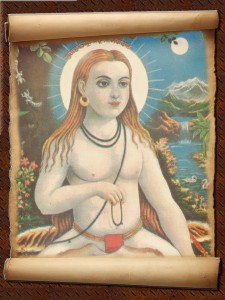 The most often associated one is the ash we collect from the sacred fire. It also means MANIFESTATION OF DIVINE POWERS or the OPULENCE WITH WHICH GOD CONTROLS EVERYTHING. The 10th chapter in the Bhagwad Geeta is called the VIBHUTI YOGA, where BHAGVAN has enumerated His DIVINE BEING in the various Manifestations in the world for He says that “He is the Om in all the Vedas, sound in space and manhood in men, fragrance in the earth, etc”

Here we speak of ShrichandraBhagwan also as a VIBHUTI for He is indeed the incarnation of BHAGWAN SHANKAR. In the treatise JAGADGURU SHRICHANDRACHARYA, the writer Shri Sitaram Chaturvedi has written about His Godliness and the events of His Life. This book is the source of information about His birth or the AVATARAN day as BHADRAPAD SHUKLA NAVMI in Vikram Samvat 1551 (Shukla is the period of the moon waxing and Navmi will be 7 days before Poornima and Vikram Samvat is the Hindu calendar which is 57 years ahead of the Gregorian calendar that we use). 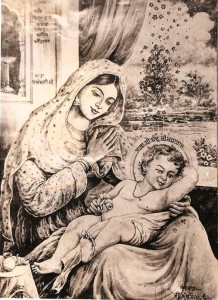 His Parents were Nanakdev and Devi Shri Sulakshana. His father was the first Sikh Guru and we find a language similar to the Sukhmani and Guru Granth Sahib in the MAATRA SHASTRA (a very important text written by Him for the Udaseen Saints). The place of birth was TAALVANDI in Punjab. At the time of birth, He had matted locks, ash on His body and a mark of a Trishul on His forehead.

At the age of 14, He took Deeksha from Avinashi Muni in the Udaseen Sampradaya. For 150 years, He performed various leelas and then disappeared in Vikram Samvat 1700 in the village of CHAMBA near the River Ravi and it is believed that His mortal body did not die and that He still lives and is thus a CHIRANJEEVI –one who always lives. (Hanuman is also known as a Chiranjeevi)

People believe that sometimes He shows up and gives special Darshan to worthy saints and mahatmas in the caves and forests of the HIMALAYAS. BrahmKetu was a very close and a dear disciple of Shrichandra to whom He left behind certain instructions just before his disappearance. 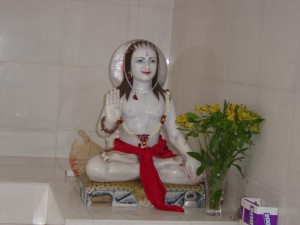 The following are his guidelines to be a true UDASEEN

1.Do not be immersed in the vaasanas or the attractions of the world and bring a bad name to the high ideals of sacrifice.

2. Continue making efforts for the progress and salvation of the Atma.

3. Enlighten yourself and also show the light to those who are engrossed in the world.

4. The main DHARMA of an UDASEEN is to follow the footsteps of Guru AVINASHI MUNI and to try and fulfill His aims.

5. To protect Dharma and to give up pride and indulge in NISHKAAM SEVA (Service where there is no expectation). Full effort should be made towards yoga or the union with the LORD.

Acharya Shrichandra was DIVINE. Chhatrapati Shivaji’s Guru; Samarth Raamdas, when he was 18 years old, had the occasion to meet Him and be blessed by Him in a village called Takli .

This important historical fact is chronicled in the books : SHROUT MUNI CHARITRAAMRIT , SHRICHANDRA DIGVIJAY and UDASEEN MUNI PARICHAY. Guru Samarth Ramdas was called Narayan in those days and was highly inclined towards penance and renunciation. Acharya Shrichandra instructed him to travel to all the pilgrimage centers and see the plight of those places. He asked him to groom a KSHATRIYA disciple who could improve the condition of these pilgrimage centers and thus protect Sanatan Dharma. Shivaji was the the Kshatriya disciple that he groomed.

In Vikram Samvat 1626, Veer Rana Pratap (of Bappa Raval’s Lineage) had the darshan of Shrichandra on the insistence of his minister Bahma Shah. In those days Acharya stayed in the ancient ashram of Hareet Muni at Udaipur. Acharya had predicted the downfall of the Mughals and praised the valour of Rana Pratap and also his predecessors.

Acharya Shrichandra was a farsighted and industrious saint whose life was indeed very remarkable. As there was a threat to Dharma from the North West region,

Acharya sent His disciples to Punjab, Sindh and the Arabian Gulf. He also had a dharamshala built in Afghanistan and at the time of writing this book in 1965, our author Ratan Bahen had mentioned the name of Swami Shankaranandji to be the Mahant there.

One story about Him is regarding the SHRICHANDRA CHINAR. Once, to impress King Yakub of Kashmir, Acharya picked up a burning log and buried it in the ground. Within no time the same log turned into a tree with greenery and fresh young leaves. This tree later became known as the SHRICHANDRA CHINAR and our Gurudev would often visit that spot when they were visiting Kashmir. 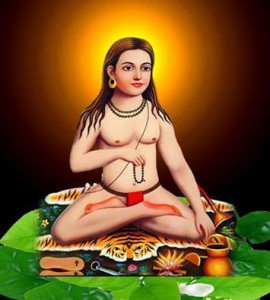 There is another anecdote about Him

In Kandhaar, Kamran killed a deer whose life was restored by Shrichandra. Kamran was highly impressed with the divine powers of Shrichandra Bhagwan and decided to correct his ways, but due to the impressions of his past life, he disobeyed his Guru and became blind.

Shrichandra Bhagwan spread his fame and glory to Dhatta, Kashmir, Kabul, Kandhaar and Peshawar. Such great people do not restrict their life to a few people but spread their blessings to people at large. Their descent on earth is for a specific reason and once that is accomplished, they disappear. The single most important contribution that Shrichandra Bhagwan made was “Maatra Shastra” a book for the Udaseen Saints and for the benefit of Sanatan Dharma.

The stories about Shrichandra Bhagwan are numerous and all these prove that when one loses faith in one’s own religion, people like Him descend on the earth and perform miracles to restore the faith and thus fear of the people slowly diminishes.

During the time of Shrichandra Bhagwan, the peaceful Indians were terrorized by the atrocities of the Mughals. Acharya would often visit the strife torn places to console the people and raise their morale. He would often visit Punjab, Sindh and the Arabian Gulf, places where conflict would erupt more often.

Once, He called for a conference of learned Mahatmas to find out the problems people were facing to protect Dharma. He advised them not to revert to severe measures which were against dharma but rather to educate and win the hearts of the people by the age old teachings and traditions as prescribed in the scriptures.

Shrichandra Bhagwan was a Guru to the whole world and thus He is called a JAGADGURU.