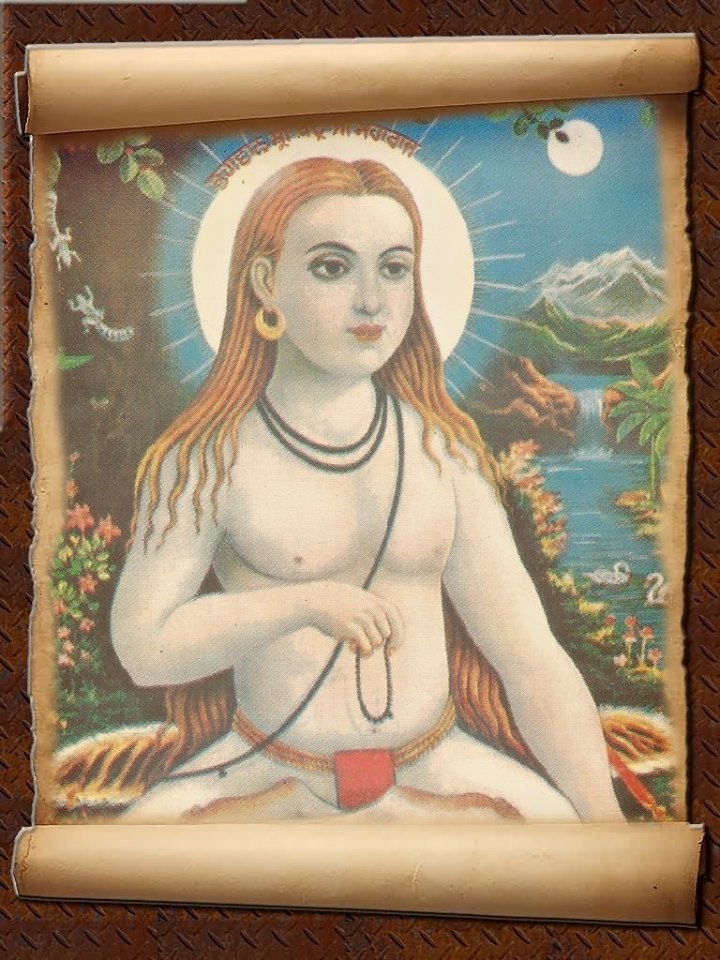 The history of 6 Acharyas after Purandasji is not known. There is a lot of information available for the 9th disciple after Balhas Muni.

He is Gurudasji .He was  a SIDDH PURUSH. He made Sindh Shikarpur as His centre. For this 19th century Mahatma there is a “KHATWALI
DHARMASHALA” constructed in Bombay in his memory. He often sat on a KHAT {cot} and that is why people called him Baba Khatwala.
Baba never walked on foot because His disciples would lovingly take Him everywhere on the KHAT{cot}
There is well known miracle that people remember about Him. One of his close disciples wanted to travel to the
Haridwar Kumbh Mela and knowing the mind of his dear disciple Baba with  his Grace made  Ganga flow in the cottage itself .

The people who had returned from Haridwar were surprised to see him there as they had also seen him  at the ‘ Har Ki  Pori’ enjoying the Kumbh bath in their company.

An idol of Ganga Mata was installed at  cottage where Ganga had appeared. Those who are not able to  attend the Kumbh Mela visit this holy place instead.
The name of this great saint was on the lips of  everyone in Sindh.

He was the 10th in line from Baalhas Muni.He stayed in Dehradun only. He did not travel to Sindh.

Perhaps he satyed back to serve his dada Guru who was the 8th in the lineage of saints. He lived during the 19th century.

” Baba BhaktRamji was 11th in line and the disciple of Bhagwandasji He was the last disciple of the 19th century. He traveled to all the

He also stayed at Matan in Kashmir like His Guru and Dada Guru. Bhakt Ramji went
to Punjab from Dehradun and established an Udaseen ashram in RAJGARH {Ludhiana}.This was a home for many  Nirvaan saints.”

In the 20th century of Vikram Samvat ShyamDasji was the disciple of Shyam Dasji and 12th in line. He was
well known for His strong body and would often make His disciples exercise . His Samadhi is in Raj garh
{Ludhiana}.He was a yogi and an enlightened ascetic.

In the twentieth century He was the second Mahatma and Gopiramji was not an ordinary saint.

He was the disciple of Shri Shyam Dasji  who was 13th in line in the lineage from Shri Chandra Bhagwan.

About 250  Nirvaan saints stayed with Him.

Their Jamaat  ( group of saints ) would travel to Malwa, Duaba,Mazha and other places in Punjab.

They had lakhs of people serving them. There was no village in Punjab that was not familiar with the fame of Gopiramji.

The minute the people heard his name they would have a smile on their faces and feel a sense of contentment and joy.

He is 14th in the lineage and Sundardasji  Vaidya was the disciple of Gopiramji. During that time  the British were attacking Indians and on the other
hand the Christian missionaries were converting hordes of Hindus by winning their sympathy by way of free medicines and care and education.

In the year 1947 at the time of partition Udaseen saints helped the refugees in all ways and did a lot of Dharmic ( charitable) work.

There was free education in the “”Maths” (temples) and the educated saints taught the regional languages ,Hindi and Urdu.

Some of the saints used ayurvedic medicines to heal the people and the other saints enlightened the people with  Ramayan, Geeta, Bhagwat, Puranas.

Mahatma was instrumental in cautioning people about the dubious ways of the missionaries. Sunderdasji was of impeccable character,a healer,a
literary person and a linguist.

In the lineage of the Balhas, Swami Ramanandji is 14th in line. He was born near Ludhiana (Punjab) in Nathumajra village on the banks of the

was Sadhvi Smt. Dayadevi. His father had named him Vasudev Sharma. Both His parents left for their heavenly abode while Swamiji was still very young.